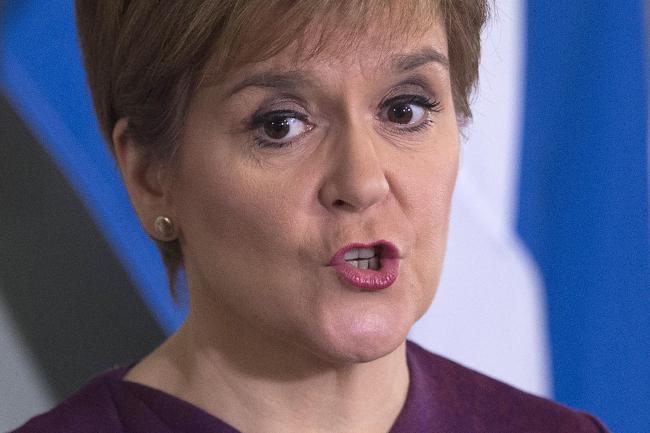 THERE are “no legal shortcuts” to a second independence referendum and Nicola Sturgeon’s mandate for one is “legally irrelevant”, two leading academics have said.

Writing for the UK Constitutional Law Association, the pair said trying to hold a referendum without the UK Government’s cooperation would be a “non-starter”.

However they said SNP MPs and supporters of independence did have a variety of other tactics available to maintain pressure to find a political solution.

“Unpalatable as it may be to some Nationalists that the exercise of Scottish self-determination depends on Westminster’s co-operation, it is hard to avoid the conclusion that this is necessary,” they said.

Nicola Sturgeon has formally asked the Prime Minister to give Holyrood be given the power to hold another referendum, citing SNP’s gains in the election as evidence of her mandate.

However Boris Johnson is expected to refuse within days, with Scottish Secretary Alister Jack saying on Sunday that not even the SNP winning an outright majority at Holyrood in 2021 would cause the UK Government to change its position.

The First Minister has often suggested she has a plan for overcoming a UK Government refusal, but has so far refused to share it.

The academics say her options for achieving international recognition for an independent Scotland without the UK Government’s agreement are in fact almost non-existent.

They say that there is little chance of success with a unilateral declaration of independence, a legal challenge, a wildcat referendum, or a ‘Plan B’ based on a big SNP election win.

Instead, they stress the need for the Scottish and UK Governments agreeing on a referendum process – something that ultimately comes down to politics.

They write: “If a second independence referendum is to take place and be effective as a means of achieving independence it is therefore crucial that it be conducted on a proper legal footing – that is, that the rules it sets out providing for the organisation of a poll and regulating the conduct of the referendum campaign are legally valid and hence binding on those to whom they apply.

“Attempting to proceed with a referendum without such a legislative underpinning would be a non-starter, given that it would depend upon the co-operation of Scotland’s 32 local authorities in organising the vote (none of which is under majority SNP control), and would almost certainly be boycotted by unionists.

“Any attempt to legislate for a referendum [at Holyrood] without a further explicit transfer of power is certain to be challenged in the courts; could cause significant difficulties within the Scottish Government, possibly including resignation of the Scottish Law Officers; and might also provoke retaliatory legislation from Westminster to make clear that such legislation is not within Holyrood’s competence.

“Moreover, even if such a Bill were to survive, a unilateral approach to authorising a second referendum might again lead to a unionist boycott and could not be certain of co-operation from the UK Government in implementing a vote for independence.”

Before the 2014 referendum, the UK Government temporarily devolved the power to hold it to Holyrood using an order under Section 30 of the 1998 Scotland Act.

The UK Government has so far refused to grant a Section 30 order for Indyref2.

Although SNP Brexit Secretary Mike Russell has hinted at a possible legal challenge to obtain a Section 30 order, the authors say it is “extremely unlikely that such a challenge would be successful, since there is no duty to make a section 30 Order, still less to introduce primary legislation”.

“The doctrine of the mandate plays, at best, a marginal role in UK constitutional law and practice, and in any case what constitutes a mandate is highly ambiguous: how clear does a manifesto promise have to be; is a majority of seats or of votes required (and can these be aggregated from more than one party); and which elections are relevant – to the UK Parliament, which holds the legal competence to dissolve the Union, or the Scottish Parliament, from which the Scottish Government’s authority derives?”

They also say judicial review challenges against the UK’s refusal – for example on grounds of irrationality or the 2014 precedent – also “seem likely to fail”.

Some senior SNP figures, including MP Angus Brendan MacNeil, have suggested a ‘Plan B’ in the face of the UK’s refusal, arguing a SNP election win could trigger independence talks.

However Prof McHarg and Mr McCorkindale say this is also unlikely to work, as it does not overcome “the power dynamics behind the referendum dilemma”, as it would still require an unwilling UK government to take part in those independence talks.

Turning to what the Scottish Government might do, the pair say it is likely Ms Sturgeon has anticipated her plan for Indyref2 in late 2020 would be rejected, and that refusal would become the centre-piece of the SNP’s campaign in the 2021 Holyrood election.

In a similar vein, they said SNP MPs could introduce a Private Member’s Bill at Westminster for the transfer of referendum powers to Holyrood in order to “signal action to an impatient audience” and “emphasise the sites of political obstruction when the Bill falls”.

The SNP could also use push the issue relentlessly at Prime Minister’s Questions, work with the Greens at Holyrood to withhold legislative consent for Westminster legislation, and encourage pressure through street protests and by getting the backing of civic Scotland.

But in the end, the most credible and effective route to independence was a political deal.

They concluded: “Whether there is a second referendum – and if so, on what terms – is a political question that will be resolved in the political arena. There are no legal short cuts through that space.

“A referendum that has a clear legal basis, agreed to between governments, that is regulated by law and consistent with democratic and rule of law values is the surest – perhaps the only – way to deliver a result that is fair, decisive, and accepted as legitimate at home and abroad.”

Tory MSP Adam Tomkins, his party’s constitution spokesman, said: “The SNP’s tactics to campaign for separation are once again shown to be utterly futile.

“The law on this is very clear; the constitution is a reserved issue.

“The people of Scotland voted no to independence in 2014 and that has not changed.”

An SNP spokesperson said: “This is about democracy, pure and simple.

“There is an explicit and resounding democratic mandate to hold an independence referendum – greater than the mandate Boris Johnson claims to impose Brexit.

“It would be entirely undemocratic for the UK government to try and continue to block a referendum – that is a position which cannot, and will not, prevail.”

All unanswered messages are recorded.
Leave your name & a UK land line number & I will return your call.

DO MAKE USE of LINKS,
>SEARCH<
&
>Side Bars<
&
The Top Bar >PAGES<
I try to make every effort to NOT infringe copyrights in any commercial way & make all corrections of fact brought to my attention by an identifiable individual
.

Please Be Sure To
.

To Spread The Facts World Wide

VISIT THE MAIN WEBSITE Our Main Web Site provides 1,000s of pages of information, views and opinions on a huge range of subjects to start reading and research just CLICK_HERE

Prof. Jill Stephenson's blog provides an excellent, informed and plausible analysis of Scotland's parlous position if it were to follow the ill advised and hate filled vitriol of the economic illiterates of the SNP - SEE:
CLICK HERE

A FORCE FOR GOOD

A Force For Good is a Web Site which has for many years offered informed views and opinions showing the importance to The Scottish of membership of these United Kingdoms & Scotland's importance to the UK - SEE: CLICK HERE

Some Thoughts Mainly on Scottish Politics is a Web Site written by & featuring Lily Deans. The site is an eclectic work pondering the reciprocal benefits between Scotland & the rest of these United Kingdoms.

To study the thought & points of view of  Lily Deans – SEE:
CLICK HERE

The Hollie Greig hoax & the tissue of lies that promote it would seem to be designed to bring notoriety to a claque of deviants & losers; meanwhile bringing unearned shame on Scotland, its judiciary & particularly Aberdeen & the Grampian Police - SEE:
CLICK HERE

Pages Also Listed At The Top