The Flat Earth Society is alive and well in Scotland

THE SCOTLAND of my youth had much to be proud of. It had, after the Treaty of Union in 1707, spawned the Scottish Enlightenment in the eighteenth century, a flowering of intellectual and cultural endeavour in philosophy, economics, literature and history, among other disciplines, whose luminaries included David Hume, Adam Smith, William Robertson, Adam Ferguson. It had produced a corpus of literary achievement by authors such as Robert Burns, Walter Scott, R.L. Stevenson, John Buchan, Lewis Grassic Gibbon. Its industrial prowess was legendary, and the spread of Scottish influence across the world was out of all proportion to the size of the country and its population. Its education system was acclaimed as one of the finest in the world.

This heritage does, of course, remain, although the education system is now reduced to average or mediocre. But now this fine country of reason, self-confidence and pragmatism has performed a volte-fâce and is heading backwards. We have to hope that its destination will not be the age of superstition and witch-burning that preceded the Enlightenment, but the signs are not good.

We owe this regression to the rise of Scottish nationalism, and to the denial of facts and expertise, the demonisation of ‘traitors’ who disagree with nationalists, and the lionisation of propagandists whose misinformation is readily believed by large sections of the population. Above all, too many Scots have retreated into a world of victimhood and grievance in which their ‘talent and resources’ are not given due recognition, their achievements are denied and their capacity for overcoming obstacles (without, let it be said, having to make much effort) is severely underestimated. This unattractive public mood is where the fraught issue of the constitution has led us.

The issue of the constitution has haunted Scotland for over a decade, most acutely since 2012 and the signing of the Edinburgh Agreement which sanctioned the holding of a referendum on Scottish secession from the UK in 2014. The pro-secession cause, led by the SNP, was an amalgam of straightforward nationalism – identity, flags, heritage – and a belief that Scots would prosper outside the UK, which was deemed to be ‘holding us back’. That is, Scots could not reach their full potential within the union. This thinking was not entirely new, but belief in it had grown in strength in parallel with the discovery of North Sea oil and the sense that it belonged to Scotland rather than the UK as a whole, and that its wealth could ensure that Scots would prosper beyond anything they had experienced. It would be safe to say that, without oil, the campaign for secession from the UK would have received much less attention and support than it attracted in recent decades.

The founding of a Scottish Parliament, or assembly, in 1999 brought these issues to centre stage and gave the SNP a platform from which to disseminate its message of victimhood and a nation wronged. Defeat in the referendum of 2014 magnified the perceived grievances of the separatist side, and the SNP government made full use of them. There is, among the separatist masses, boiling anger about ‘promises not kept’ and ‘resources stolen’. They claim that the Smith Commission’s report failed to enact promises that had been made (“The Vow”), even though SNP representatives on the Smith Commission signed the report along with representatives from other parties. Multiple grievances are raised daily on social media. The most bizarre recent example of this relates to the issue of shipbuilding.

The separatist masses have been told by SNP Central that the vessels promised to Scottish shipyards during the referendum campaign have not materialised. This is untrue. The claim is sometimes based on the failure to deliver the 26 frigates that were allegedly promised – when what was actually mentioned was 13 Type 26 frigates. Easy mistake to make? Or a mischievous untruth? What is being delivered is 18 vessels. On being told this, one separatist tweeter complained that what had been promised (13 vessels) was not being delivered. It did not matter what our friends at UK Defence Journal said by way of correction, the separatist tweeter remained of the view that Scots were being ‘treated as second class citizens’. He was not alone, as others weighed in with the same misapprehensions.

There is no attempt by the SNP Scottish government to correct their followers’ misapprehensions. Indeed, individual SNP politicians collude in fostering misapprehensions that generate grievance. That includes disparaging the author of a meticulous blog on Scotland’s economic and financial position that has received acclaim from economists who are dismissed as ‘unionists’, of course. His open invitation to critics to point out his errors and promise to correct any matters that are proved to be errors receives pretty much only fake news ‘corrections’ that he easily disproves.

The slights perceived are legion. They have included the marketing of the Tunnock’s Teacake as ‘The Great British Teacake’. A demonstration was held by the Scottish Resistance (don’t ask) outside the Tunnock’s premises to protest about this. Other nationalists take to social media to rail against the use of the Union Flag emblem on vegetables, fruit and other produce. Boycotts of shops selling products bearing the Union Flag emblem are called for. Some shoppers have even filled a trolley and then left it behind without purchasing anything, in protest at stores that seem to support the union.

Now we have the biggest grievance of all: Boris Johnson’s refusal to grant Ms Sturgeon a Section 30 order to allow her to call a referendum on separatism at any time (or times) that she deems favourable to her cause. 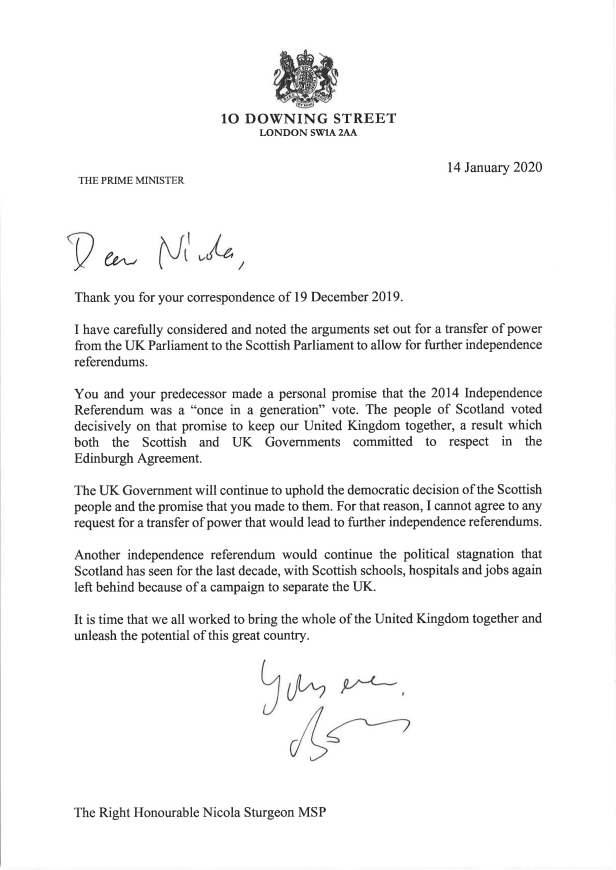 It seems, however, that she can huff and puff as much as she likes, but there is nothing she can do about it. Threats to take the case – based on her perceived ‘mandate’ – to courts of law now seem empty, after distinguished lawyers have pointed out that she does not have a case in law. Undeterred, a crowdfunding campaign to take the UK government to court is said to have raised £30,000. Yes, people really do pay up for this kind of thing.

Johnson’s refusal has generated a spate of complaints about how Scots are ‘prisoners’ who are ‘held hostage’. Some even claim that Scotland is in an ‘abusive relationship’ with England. These people seem unaware of how insulting their claims are to those who are imprisoned without cause, held hostage or are in a genuinely abusive relationship. Michael Russell, the Constitution Secretary in the Scottish Government, has said that, somehow, he will hold a Scottish referendum this year. “Boris Johnson can’t stop them choosing…. This will not stand”. The former diplomat, Craig Murray, reckons that Scots should seize their independence and appeal to international law to support their cause. They should recall all Scots MPs and MEPs to join with MSPs in a declaration of independence and hold a confirmatory referendum in September 2020.

In their different ways, Russell and Murray are courting civil disobedience; certainly, they are playing to the gallery of activists in the ‘movement’, such as those who ‘marched’ in Glasgow last Saturday. Tactics such as blockading Faslane or other facilities are discussed. There are barely veiled – and sometimes open – threats of a resort to violence on the part of hotheads. The presence of Irish Republican banners at separatist events suggests that some participants would not be averse to turning Scotland into a country of confrontation and strife.

All of this is based on a belief that a majority of Scots will support a referendum and a declaration of independence. There has, however, been no evidence that a majority of Scots wants another referendum any time soon. In fact, polling shows that they do not. A few polls have shown a narrow majority favouring secession, but the vast majority show a majority in favour of remaining in the UK. Ms Sturgeon and her associates clearly hope that there will be enough outrage in Scotland at Mr Johnson’s refusal of a Section 30 order eventually to push support for secession over the line. Wednesday’s edition of the little-read nationalist propaganda sheet, The National, contained an “open letter to half of Scotland”, addressing pro-union voters: “You might not agree with us on independence (yet), but the Prime Minister is also denying you the right to choose your own future”. The answer to that is that we chose already, in 2014.

Ms Sturgeon’s next gambit is to hold another vote at Holyrood on the issue of staging another referendum. She will, of course, win it, with the help of the separatist Greens and perhaps a few sympathetic Labour MSPs. But so what? The answer remains the same: the constitution is a reserved matter and the Scottish parliament, elected as long ago as 2016, has no locus in it. In any case, Johnson’s refusal is undoubtedly a relief to Ms Sturgeon who is, according to SNP sources, entirely unprepared for a referendum campaign – there is, for example, no prospectus. Further, she is aware that losing a second referendum, as seems likely, would for most Scots put a cap on the issue for years, and lose her well-paid job.

All this is now in the realm of the all too familiar. But the question remains: how has a country of reason, self-confidence and pragmatism become one of division, victimhood and belief in nationalist fake news? How do so many Scots believe that a separate Scotland would quickly, easily and painlessly enter the EU? Why do so many of them not ask what a separate Scotland would do to bridge the gap left once we no longer were receiving the massive annual fiscal transfer from the Treasury?

The answer is that too many Scots have fallen prey to nationalist superstition and flat earthery. And the biggest question of all: how do we ever recover from this overheated, unpleasant and resentful state? We certainly cannot do it while we are governed by the party that has – quite deliberately – brought us to this pass.

All unanswered messages are recorded.
Leave your name & a UK land line number & I will return your call.

DO MAKE USE of LINKS,
>SEARCH<
&
>Side Bars<
&
The Top Bar >PAGES<
I try to make every effort to NOT infringe copyrights in any commercial way & make all corrections of fact brought to my attention by an identifiable individual
.

Please Be Sure To
.

To Spread The Facts World Wide

VISIT THE MAIN WEBSITE Our Main Web Site provides 1,000s of pages of information, views and opinions on a huge range of subjects to start reading and research just CLICK_HERE

Prof. Jill Stephenson's blog provides an excellent, informed and plausible analysis of Scotland's parlous position if it were to follow the ill advised and hate filled vitriol of the economic illiterates of the SNP - SEE:
CLICK HERE

A FORCE FOR GOOD

A Force For Good is a Web Site which has for many years offered informed views and opinions showing the importance to The Scottish of membership of these United Kingdoms & Scotland's importance to the UK - SEE: CLICK HERE

Some Thoughts Mainly on Scottish Politics is a Web Site written by & featuring Lily Deans. The site is an eclectic work pondering the reciprocal benefits between Scotland & the rest of these United Kingdoms.

To study the thought & points of view of  Lily Deans – SEE:
CLICK HERE

The Hollie Greig hoax & the tissue of lies that promote it would seem to be designed to bring notoriety to a claque of deviants & losers; meanwhile bringing unearned shame on Scotland, its judiciary & particularly Aberdeen & the Grampian Police - SEE:
CLICK HERE

Pages Also Listed At The Top